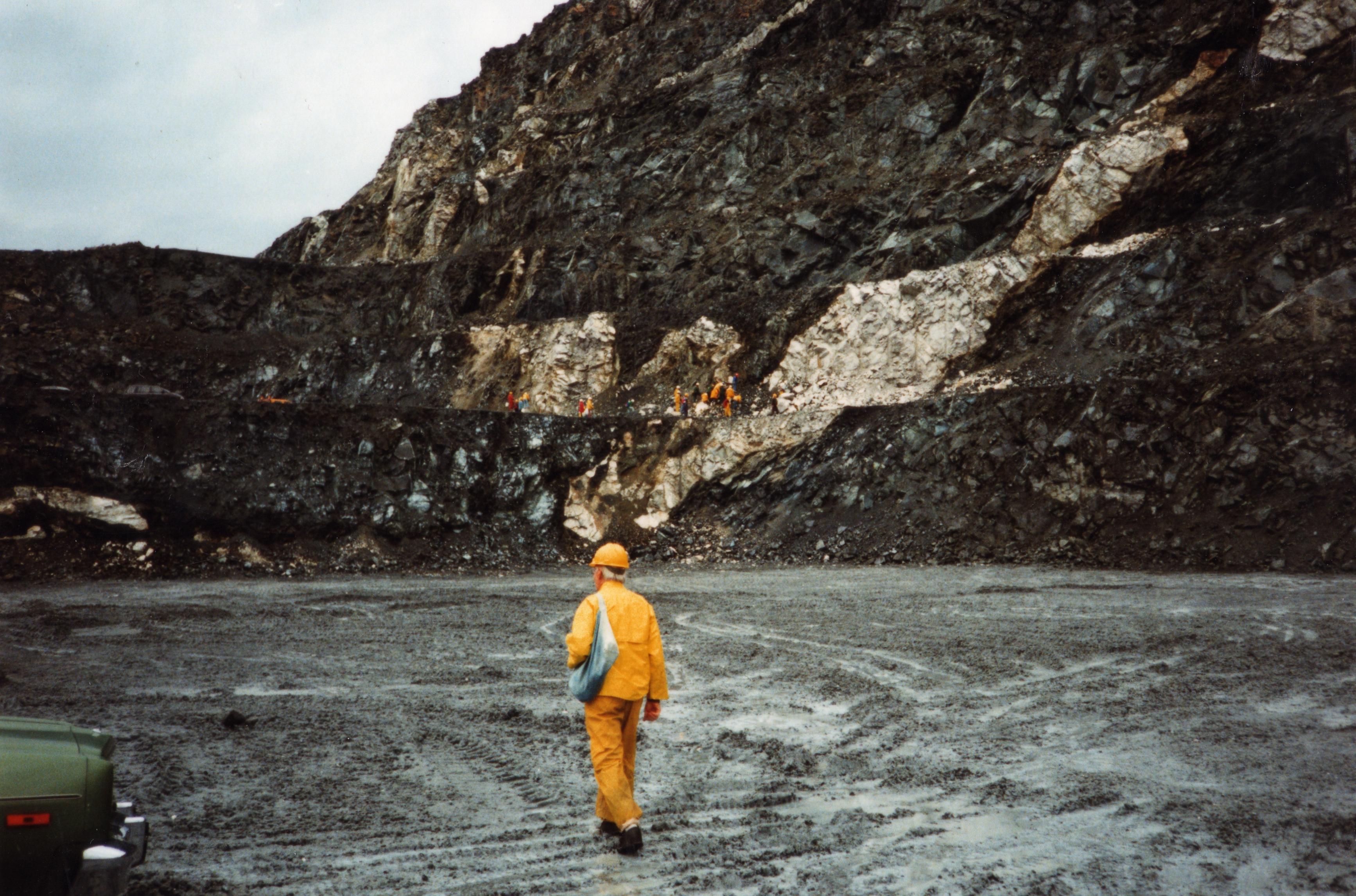 Richmond Minerals Inc.’s Ridley Lake Gold Project (the “Project”) consists of 196 contiguous unpatented single cell and boundary mining claims in which Richmond owns a 100% interest.
The Project is centrally located within the Swayze Greenstone Belt (the “SGB”) in north central Ontario in Rollo and Raney Townships, Porcupine Mining Division or more specifically 40 km southwest of the town of Foleyet and 120 km west-southwest of the city of Timmins.

• Recent significant gold discoveries within the SGB include the Cote Lake deposit (acquired by Iamgold in April 2012 for $585 million), and the Probe Mines Borden Lake gold discovery (recently acquired by Goldcorp for $526 million), a multi-million ounce gold deposit located approximately 23 miles to the west and on strike with Richmond’s Ridley Lake Project.
• Early exploration work on the Property dates back to 1932 prospecting. Two quartz veins (the Cyril Knight and the Aguara Showings) trending in an east-west strike orientation were discovered in the central property area. These veins were exposed on surface for strike lengths up to 245 m, with widths varying between 1 and 3 m. Assays from these veins were highly variable, with grades ranging from trace values up to 23 g/t gold (0.7 ounces per ton).
• The Project can be accessed year-round by a network of logging and bush roads and is underlain by part of a major sequence of early Precambrian volcanics and sediments referred to as the Swayze volcanic complex or the Swayze-Deloro metavolcanicmetasedimentary belt.
• Gold mineralization discovered through diamond drilling to date at the project is associated with a variety of geological features which include shear zone development, quartz carbonate stockwork systems and contacts between felsic and mafic flows.

Richmond’s Ridley Lake Property is located in Rollo and Raney Townships, Porcupine Mining Division, north central Ontario, 40 km southwest of the town of Foleyet and 120 km west-southwest of the city of Timmins. The Property can be accessed year round by a network of logging and bush roads.

The Property is centrally located within the Swayze Greenstone Belt, and covers an 8 kilometer section of the Ridout Shear Zone (the “RSZ”). The RSZ is currently believed to be the extension of the Larder Lake Break (i.e. host of the Kirkland Lake Gold Camp), and is the major structural feature in the region that is host to numerous gold deposits and occurrences.

The Property consists of 196 contiguous unpatented single cell and boundary mining claims in which Richmond owns a 100% interest. 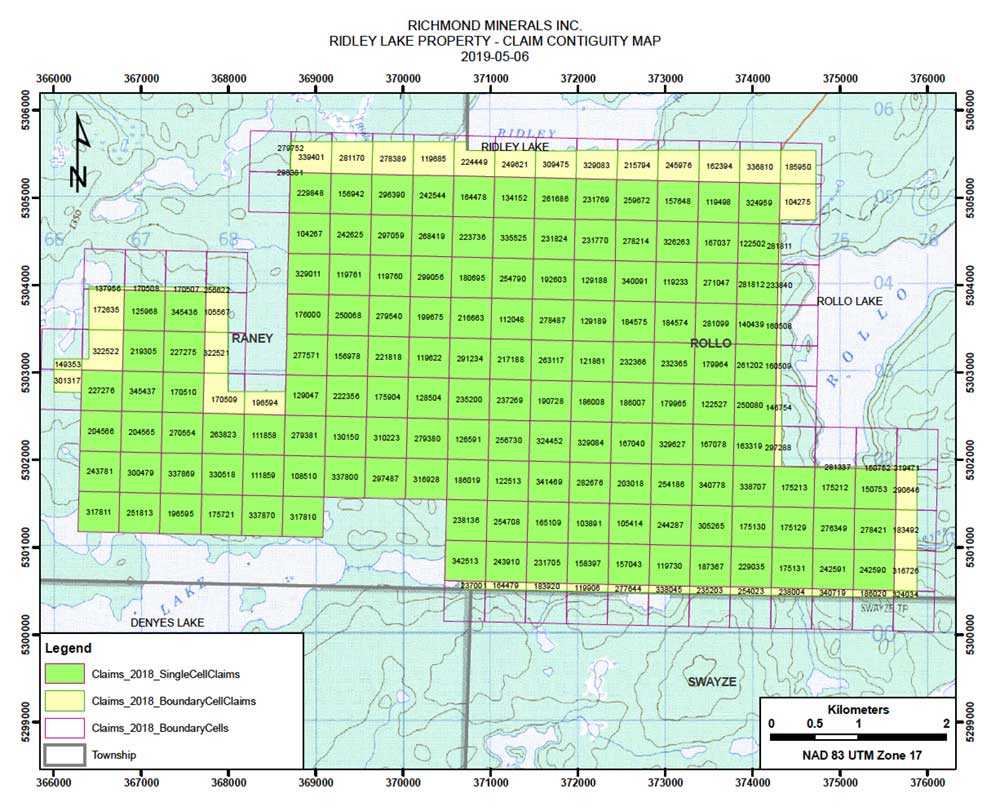 Early exploration work on the Property dates back to 1932 prospecting. At that time two significant quartz vein systems (the Cyril Knight and the Aguara Showings) trending east/west were discovered in the central and north central property area.

These veins were exposed on surface for lengths up to 245 m, with widths varying between 1 and 3 m. Gold assays from these veins were highly variable, with grades ranging from trace values up to 23 g/tonne gold (0.7 ounces per ton).

Between 1932 and 1982, little exploration work was carried out on the Property.

In 1982 Richmond staked claims covering the quartz vein showing areas and completed geophysical surveys, mapping, and trenching between 1983 and 1988. Results from this exploration work determined that the Aguara and Cyril Knight showing areas were coincident with magnetic and induced polarization anomalies of 3 to 4 times background levels. 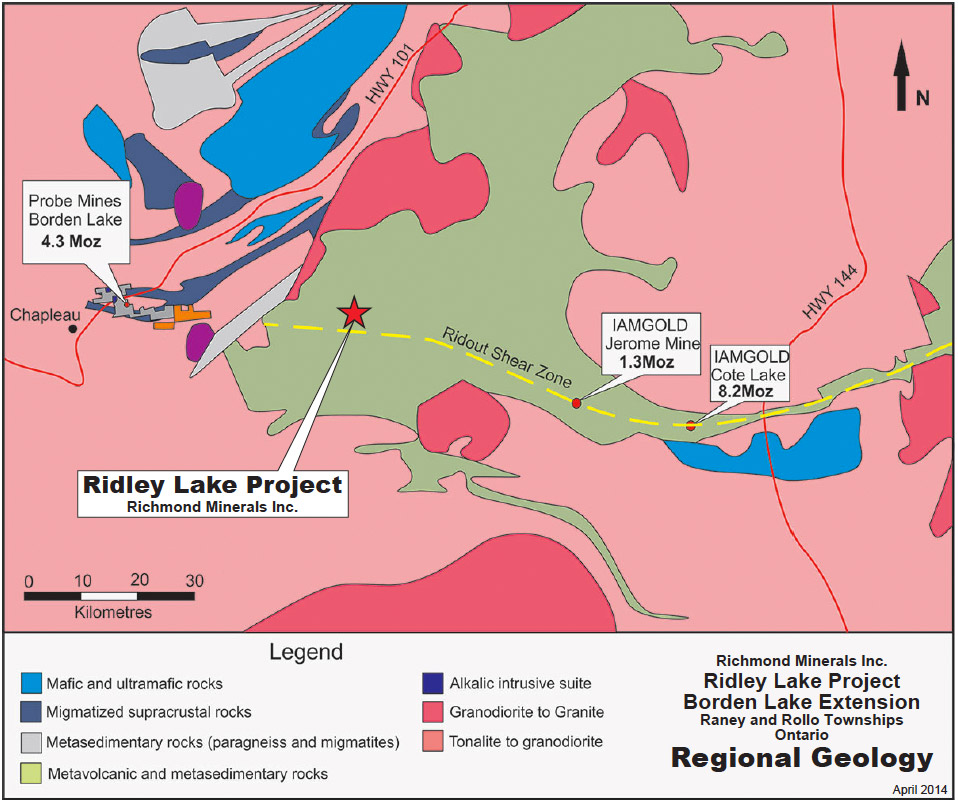 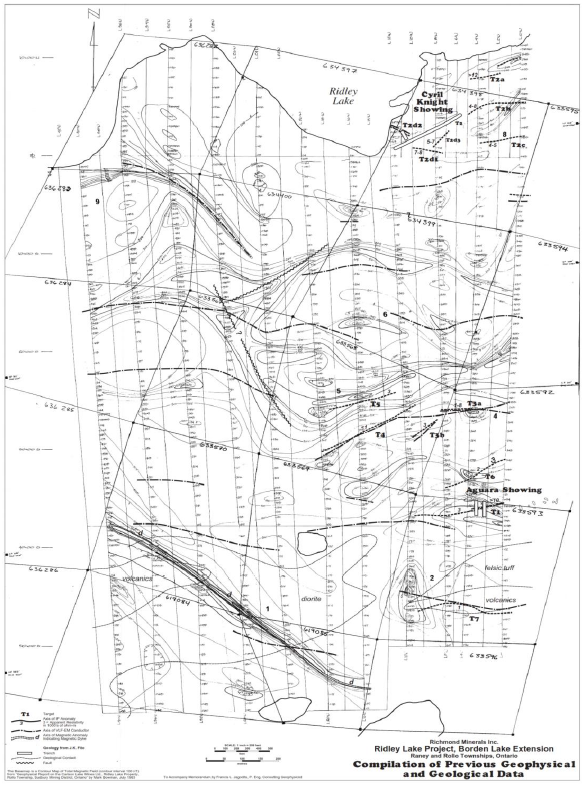 A limited program of diamond drilling testing the Aguara Zone geophysical anomalies and surface showings was undertaken in 1989 (2,471 m in 13 holes). Eleven of 13 holes intersected broad zones of gold mineralization, with one hole failing to reach its target depth due to caving.

At the time of the discharge, these proceedings were the oldest outstanding civil litigation in Ontario. 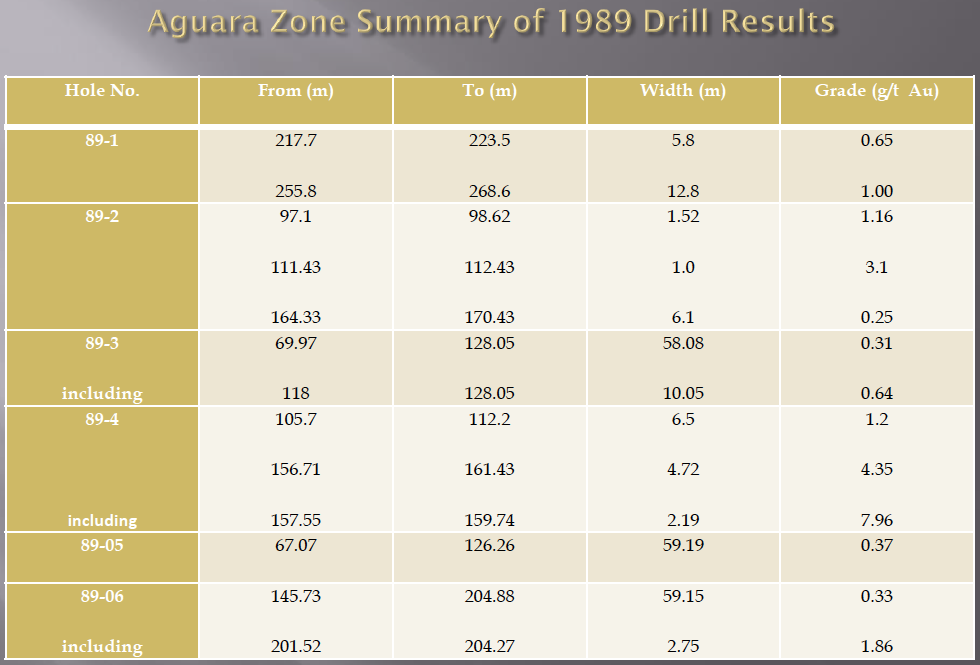 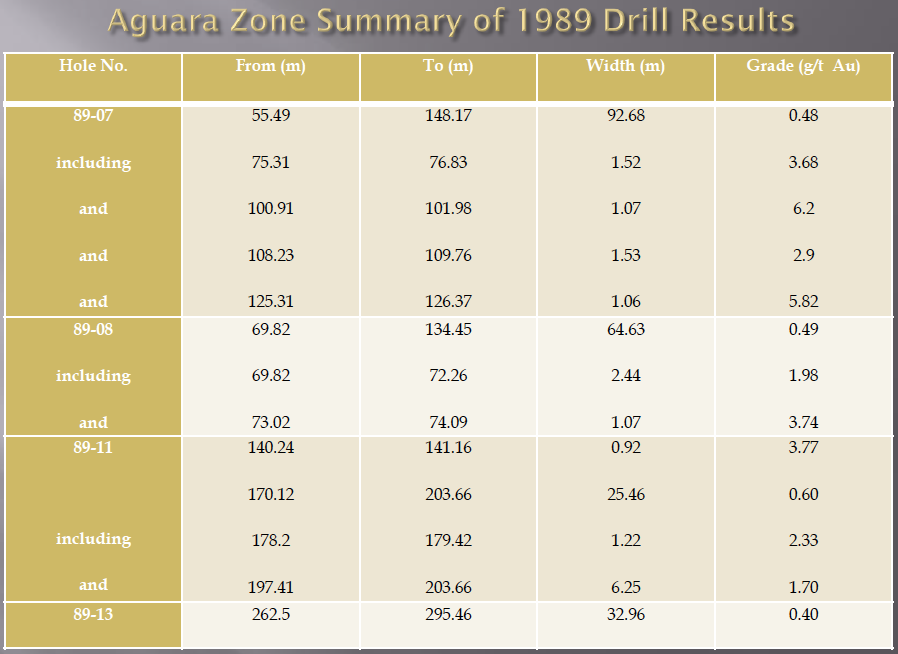 Gold mineralization discovered through diamond drilling in the Aguara Zone is associated with a variety of geological features that include:

In June of 2015, a geophysical survey grid was cut on four of the Company’s 100%-owned claims located immediately to the east of the Aguara gold showing, followed by the completion of Spectral Induced Polarization (IP)/Resistivity & Magnetic surveys.

The surveys were successful in identifying a well-defined IP anomaly characterized by high chargeability and resistivity down to approximately 50 m and a prominent coincidental magnetic anomaly (the “Aguara East anomaly”), having a northeast orientation and a strike length in excess of 825 meters.

To test these targets Richmond completed 900 m of diamond drilling in 6 holes, all having an azimuth of 180 degrees and at an inclination of -45 degrees. 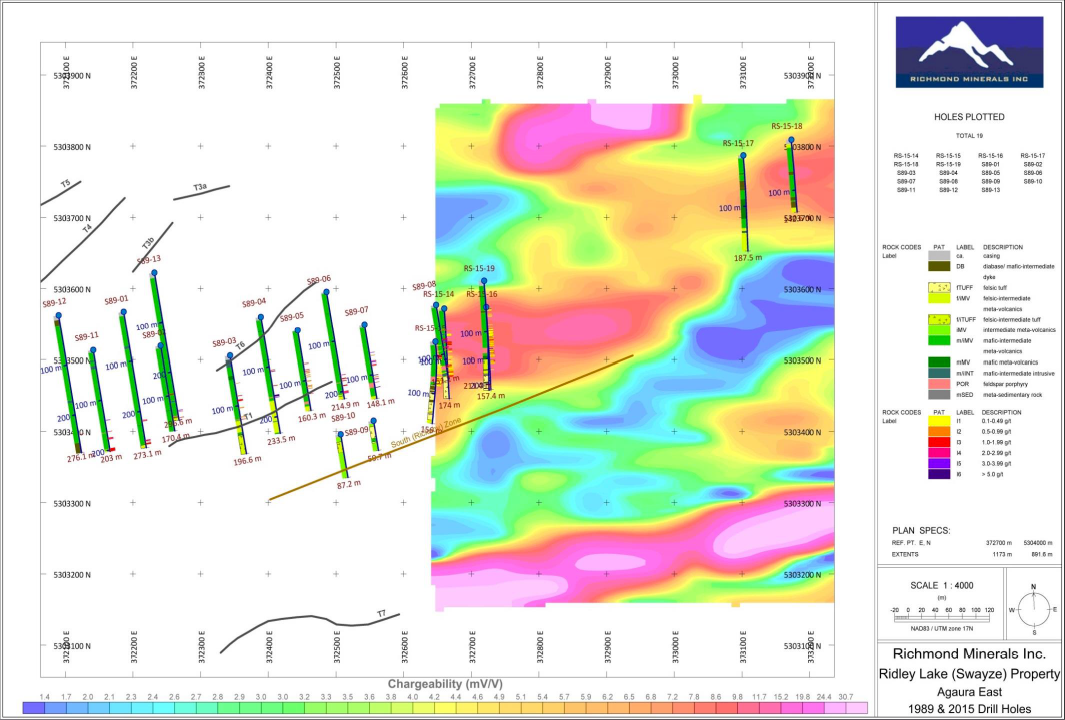 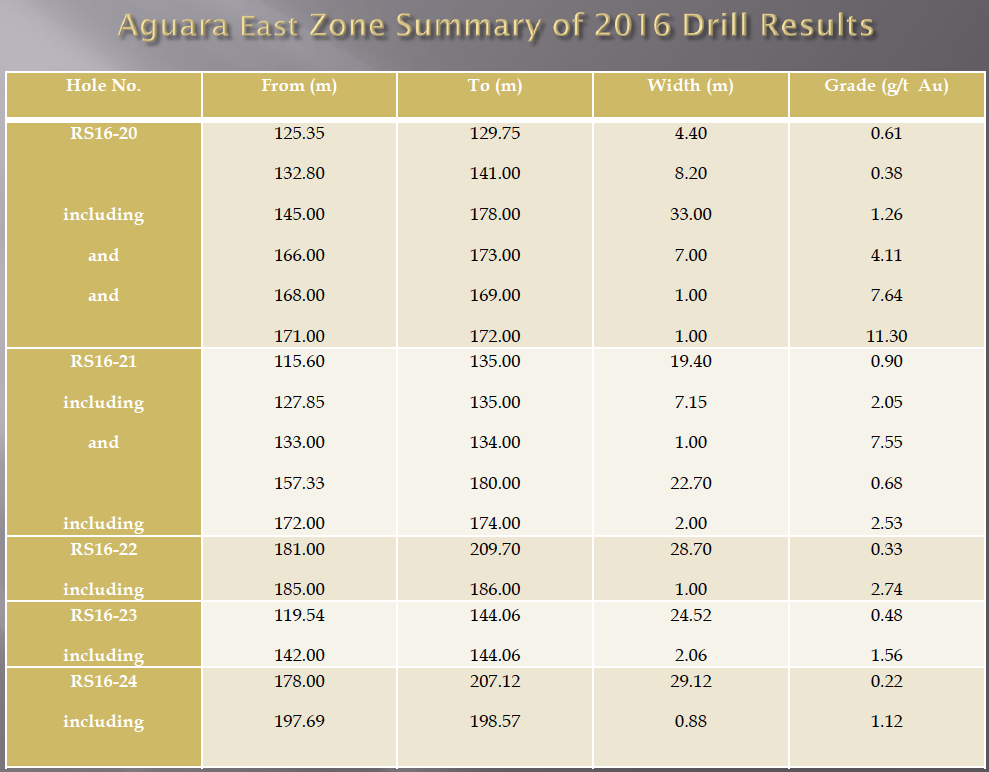 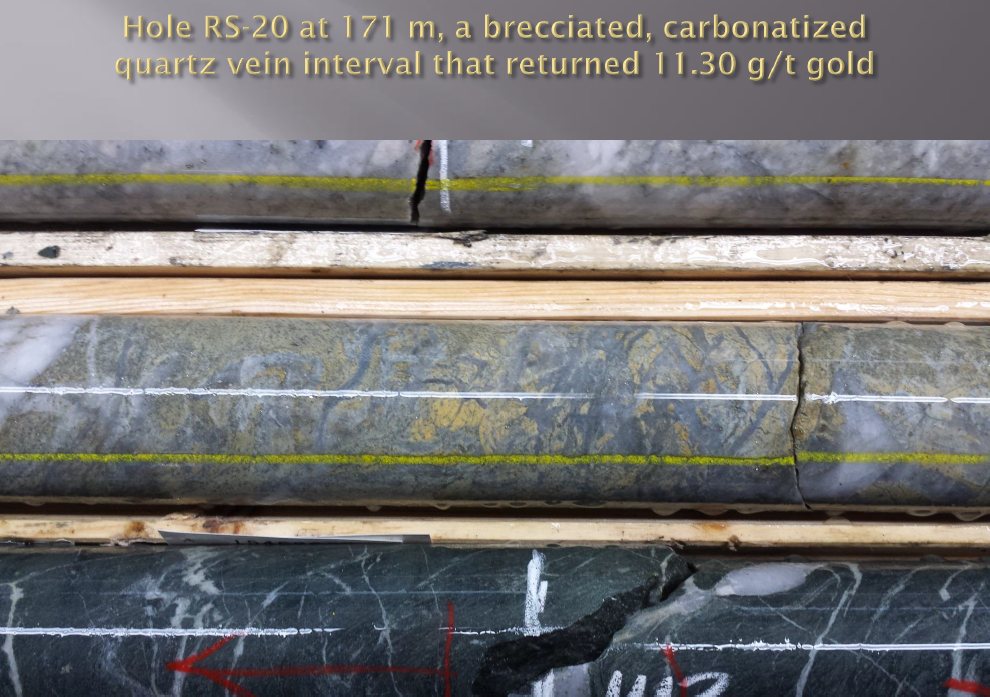 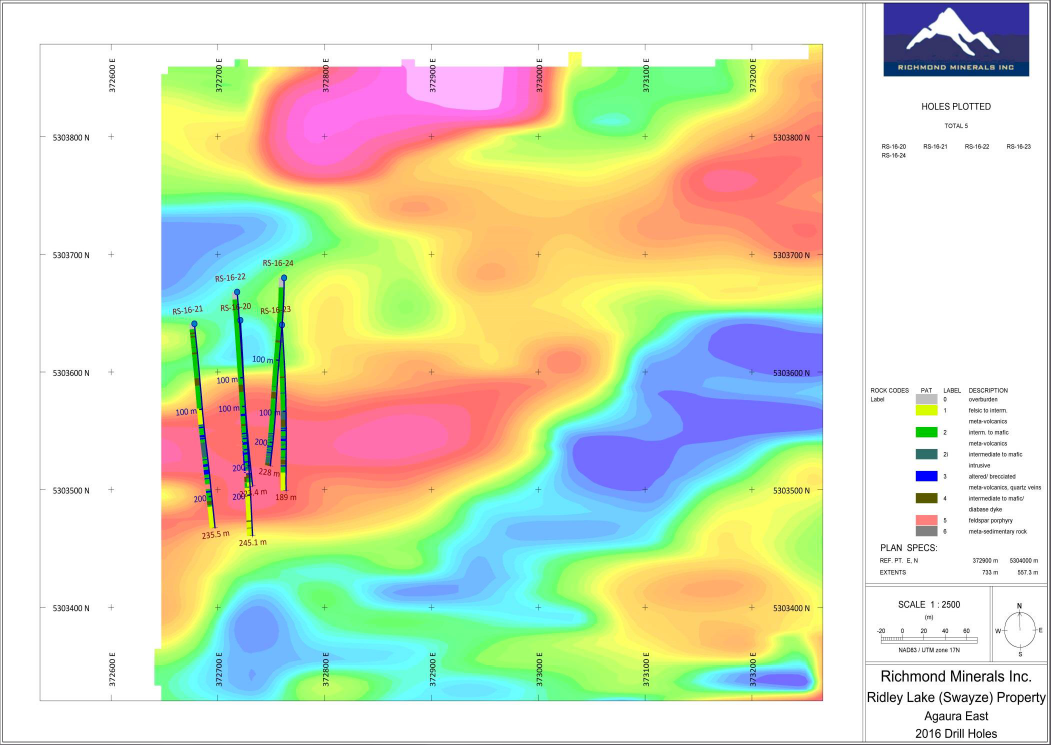 In November 2016 the Company completed a Spectral Induced Polarization (IP)/Resistivity survey to expand to depth the earlier IP survey completed in July 2015 on the Aguara East claims.

Modelling of the data obtained from the combined surveys identified multiple targets at vertical depths down to IP survey limit of approximately 200 meters and may indicate stronger pyrite mineralization (and possibly gold mineralization) with depth.

Testing these deep targets will be the primary focus of future drilling programs. 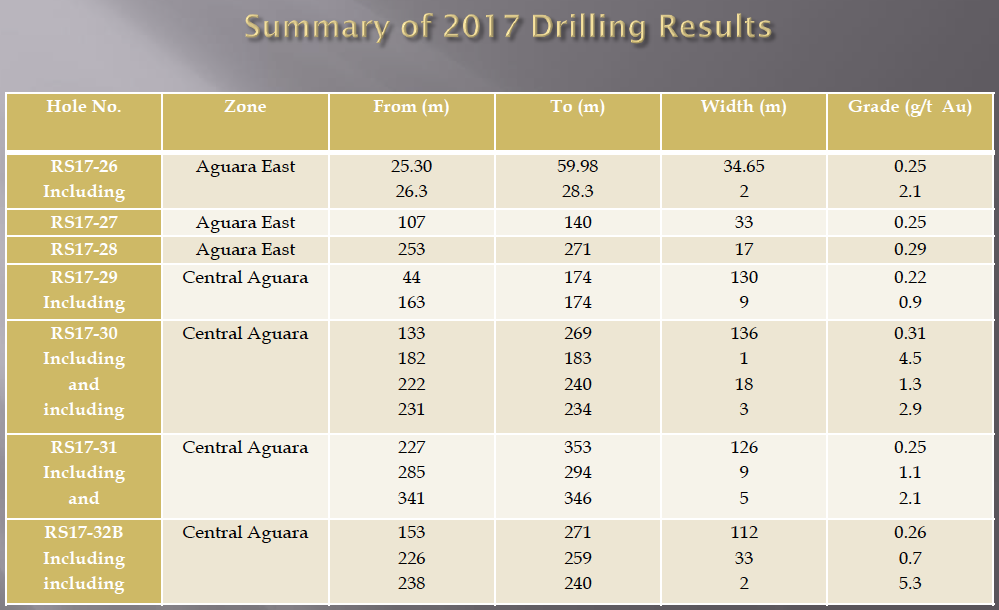 The drill intervals reported for all drilling programs represent axial core intersection lengths and true widths are not known at this time.

Fall 2018 IP surveying on the newly cut Aguara western extension grid was successful in identifying five anomalous trends (identified as RW-1, and RW-4 through RW-7). The significant trend identified is RW-1, which appears to be the extension of the Aguara East IP Anomaly that was the focus of the first three phases of diamond drilling.

Trend RW-1 is centered about the West Grid Baseline and has now been extended from (metres) Line 3+00 E to Line 6+00 W. The trend is associated with strong apparent resistivities and is suggestive of strong quartz-carbonate alteration associated with possible gold mineralization.

Trend RW-5 is a prominent chargeability anomaly initially identified in the north eastern part of the survey grid and has now been extended to 7+50 W from 2+25 E. There is no history of diamond drilling in this area of the Property.

Trend RW-6 is a new anomaly that appears to originate approximately at line 5+25 W in the southern part of the survey grid. This anomalous IP response strikes to the northwest and has a deeper source (greater than 100 m). This anomaly appears to extend to the edge of the survey grid at 9+00 W, where it becomes quite wide and deep, and is open along strike to the west and to depth. The associated resistivities of this anomaly exceed 10,000 ohm-m and may also be indicative of possible gold mineralization.

Trend RW-7 is observed intermittently at larger dipole separations also indicating a greater depth to source. This trend is located between RW-1 and RW-5. Associated resistivities of this anomaly are in excess of 10,000 ohm-m and there is no history of diamond drilling in this area of the Property. 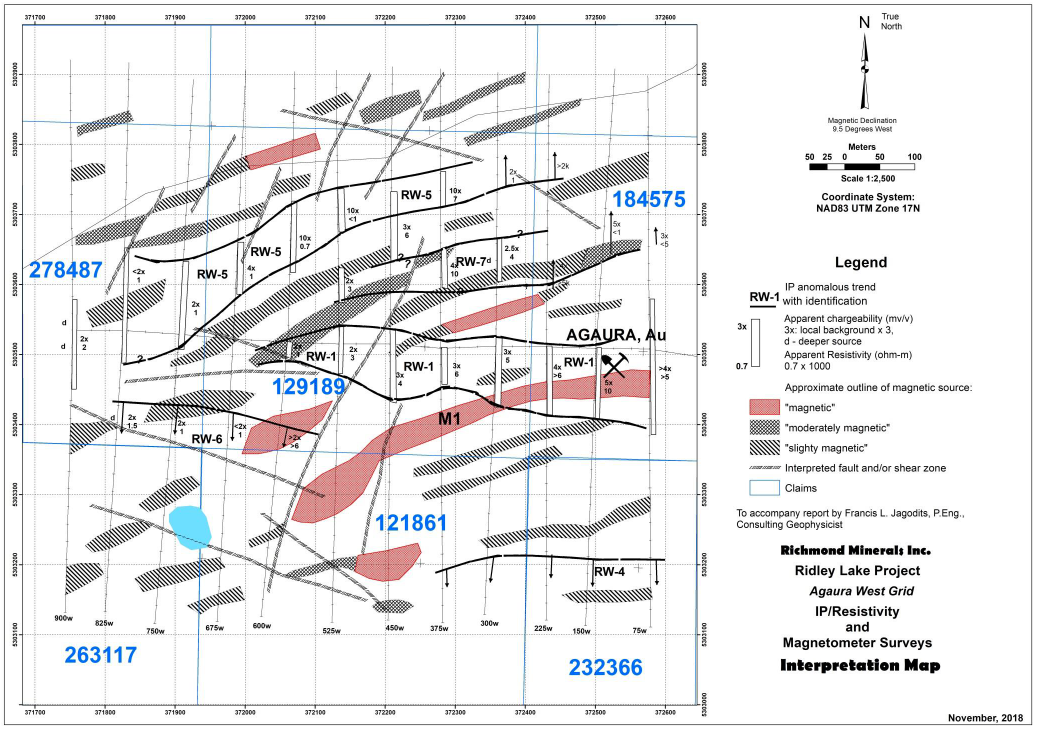 Multiple strong and deep magnetic/IP anomalies remain untested 600 m west of and on strike with the Aguara zone. These zones will be the primary target of the next round of drilling at the Ridley Lake Gold Project in 2020.